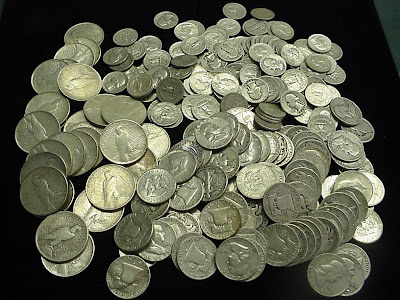 Gresham's Law was named for Sir Thomas Gresham, an English financier that lived 500 years ago in Tudor England. He observed that "bad money always drives out the good" whenever the government forces both coins to be accepted on a equal basis in commerce. "Good" money was defined as coins with commodity value equal to or higher than their governmental decreed value, and "bad" coins were slugs that were made from debased metals whose inherent commodity value was lower than the face amount. In essence, on a level field of commerce, Gresham noted that people tended to pay with the bad money and hoarded the good, while vendors gave change in the bad and likewise held onto the good.

In the USA the best example of Gresham's Law occurred in 1965 when the government eliminated the 90% silver content from dimes and quarters, and reduced the Kennedy half dollar to a 40% silver & 60% copper alloy. Immediately, the older precious metal coins all but disappeared from circulation as they were mason-jarred in favor of spending the new base metal coins and debased 1965 Kennedy 40% silver halves. In response to the popular hoarding of the old 90% silver coins LBJ famously pronounced, "if anybody has any idea of hoarding our silver coins, let me say this. Treasury has a lot of silver on hand, and it can be, and it will be used to keep the price of silver in line with its value in our present silver coin. There will be no profit in holding them out of circulation for the value of their silver content".

We know today that Johnson was not only a lousy President, but also a similarly dismal prophet, as the value of 90% and 40% "junk silver" coins continues to soar! In fact, in 1971, only a few years after LBJ stepped down in disgrace, the US removed the last silver content from the circulating Kennedy half. Once again despite Johnson's earlier prediction, the 40% silver halves rapidly vanished from commercial transactions as the new base metal 50-cent pieces were thrown at cash registers in their place.

Yet another example of Gresham's Law in action occurred in December 2006 as the commodity prices of both copper and nickel rose substantially. Suddenly, the commodity value of 1909-1982 copper pennies and nickels were worth more in metal content than their face value as coins. In response, Congress passed a law making the exportation and melting down of pennies and nickels illegal. As in the case of the earlier 90% silver coins, many pennies and nickels are currently being hoarded by speculators hoping to take advantage of the valuable copper and nickel content in the old one-cent and the current five-cent pieces if/when the anti-melting law is repealed.

The conclusion to be drawn from Gresham's Law is obvious. Good money will always be desired as a reserve of wealth, especially while the US and other governments continue along the path of gradual debasement of coinage and proliferation of inherently worthless "fiat" paper money! Buy and hold silver and gold US coins, and sit back while the tsunami of paper money & slug coins wash all others away!

Time is running out fast! Hyperinflation seems unavoidable as fiat paper money is being printed as fast as the US presses can run. To protect your wealth and your family, buy gold and silver now from these top companies, APMEX Gold and Silver